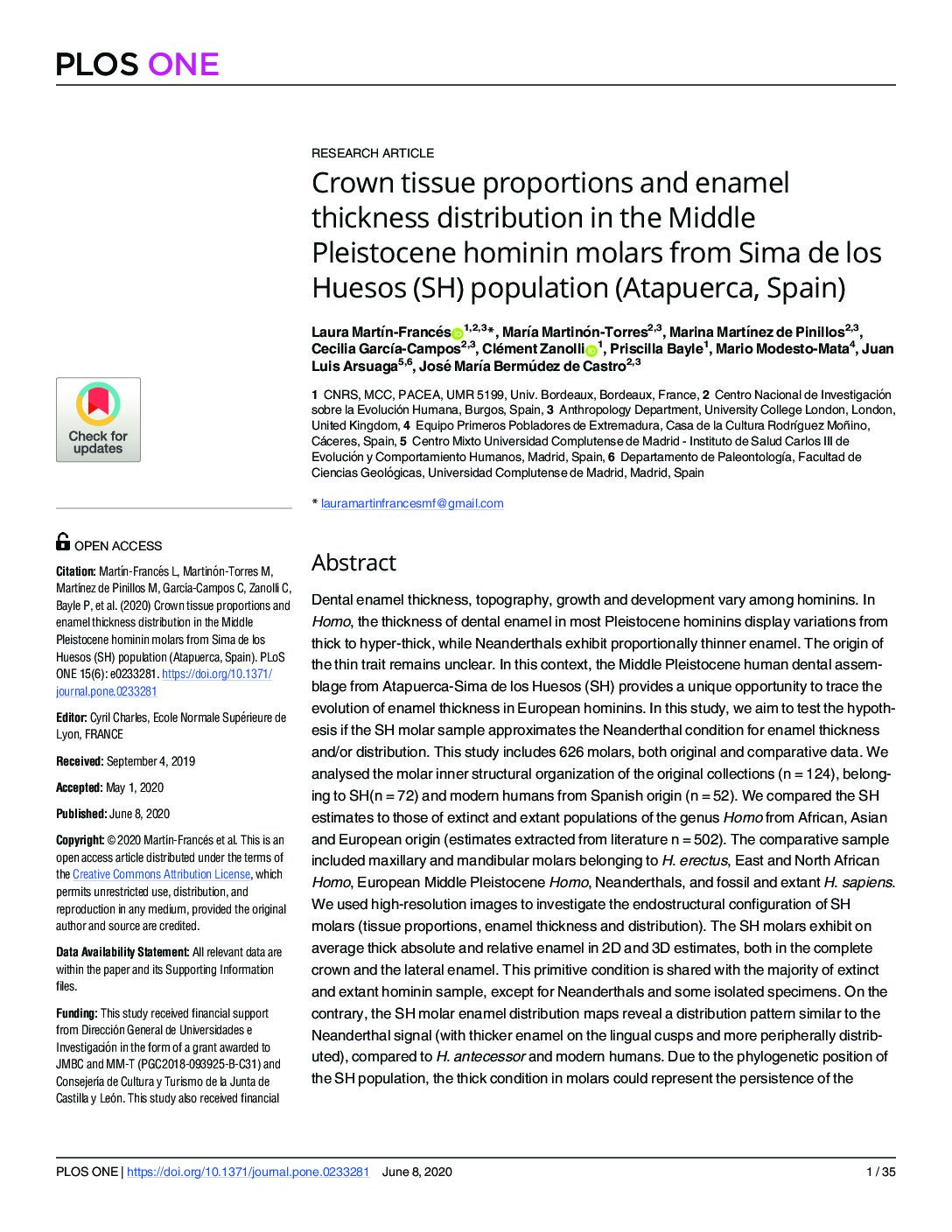 Abstract
Dental enamel thickness, topography, growth and development vary among hominins. In Homo, the thickness of dental enamel in most Pleistocene hominins display variations from thick to hyper-thick, while Neanderthals exhibit proportionally thinner enamel. The origin of the thin trait remains unclear. In this context, the Middle Pleistocene human dental assemblage from Atapuerca-Sima de los Huesos (SH) provides a unique opportunity to trace the evolution of enamel thickness in European hominins. In this study, we aim to test the hypothesis if the SH molar sample approximates the Neanderthal condition for enamel thickness and/or distribution. This study includes 626 molars, both original and comparative data. We analysed the molar inner structural organization of the original collections (n = 124), belonging to SH(n = 72) and modern humans from Spanish origin (n = 52). We compared the SH estimates to those of extinct and extant populations of the genus Homo from African, Asian and European origin (estimates extracted from literature n = 502). The comparative sample included maxillary and mandibular molars belonging to H. erectus, East and North African Homo, European Middle Pleistocene Homo, Neanderthals, and fossil and extant H. sapiens. We used high-resolution images to investigate the endostructural configuration of SH molars (tissue proportions, enamel thickness and distribution). The SH molars exhibit on average thick absolute and relative enamel in 2D and 3D estimates, both in the complete crown and the lateral enamel. This primitive condition is shared with the majority of extinct and extant hominin sample, except for Neanderthals and some isolated specimens. On the contrary, the SH molar enamel distribution maps reveal a distribution pattern similar to the Neanderthal signal (with thicker enamel on the lingual cusps and more peripherally distributed), compared to H. antecessor and modern humans. Due to the phylogenetic position of the SH population, the thick condition in molars could represent the persistence of the plesiomorphic condition in this group. Still, more data is needed on other Early and Middle Pleistocene populations to fully understand the evolutionary meaning of this trait.