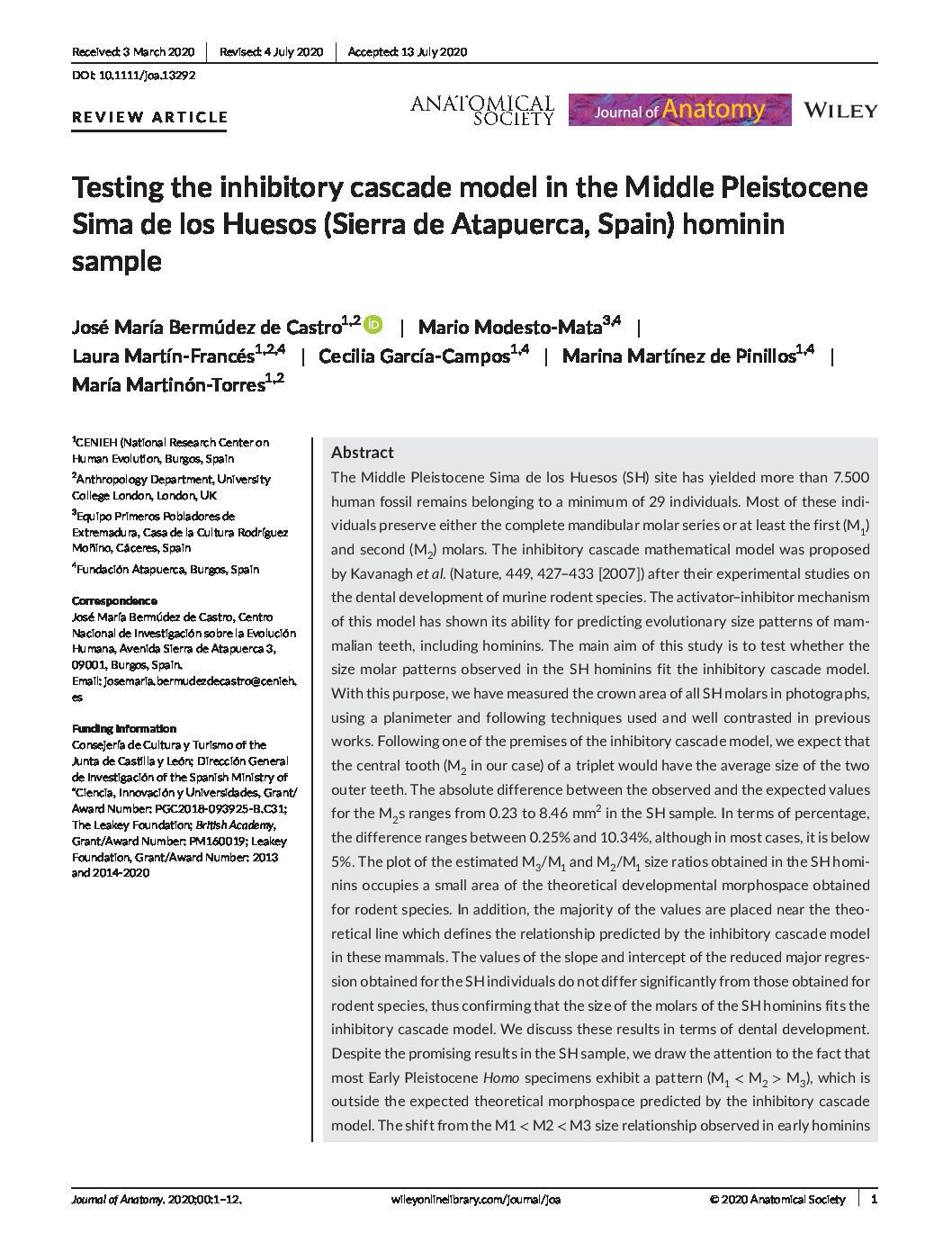 Abstract
The Middle Pleistocene Sima de los Huesos (SH) site has yielded more than 7.500 human fossil remains belonging to a minimum of 29 individuals. Most of these individuals preserve either the complete mandibular molar series or at least the first (M1) and second (M2) molars. The inhibitory cascade mathematical model was proposed by Kavanagh et al. (Nature, 449, 427–433 [2007]) after their experimental studies on the dental development of murine rodent species. The activator–inhibitor mechanism of this model has shown its ability for predicting evolutionary size patterns of mammalian teeth, including hominins. The main aim of this study is to test whether the size molar patterns observed in the SH hominins fit the inhibitory cascade model. With this purpose, we have measured the crown area of all SH molars in photographs, using a planimeter and following techniques used and well contrasted in previous works. Following one of the premises of the inhibitory cascade model, we expect that the central tooth (M2 in our case) of a triplet would have the average size of the two outer teeth. The absolute difference between the observed and the expected values for the M2s ranges from 0.23 to 8.46 mm2 in the SH sample. In terms of percentage, the difference ranges between 0.25% and 10.34%, although in most cases, it is below 5%. The plot of the estimated M3/M1 and M2/M1 size ratios obtained in the SH hominins occupies a small area of the theoretical developmental morphospace obtained for rodent species. In addition, the majority of the values are placed near the theoretical line which defines the relationship predicted by the inhibitory cascade model in these mammals. The values of the slope and intercept of the reduced major regression obtained for the SH individuals do not differ significantly from those obtained for rodent species, thus confirming that the size of the molars of the SH hominins fits the inhibitory cascade model. We discuss these results in terms of dental development. Despite the promising results in the SH sample, we draw the attention to the fact that most Early Pleistocene Homo specimens exhibit a pattern (M1 < M2 > M3), which is outside the expected theoretical morphospace predicted by the inhibitory cascade model. The shift from the M1 < M2 < M3 size relationship observed in early hominins (including H. habilis) to the M1 > M2 > M3 size relationship, which is predominant in modern humans, includes sequences that depart from predictions of the inhibitory cascade model. Additional studies are required to understand these deviations.